Fighting against Climate Change?: Contemplating Taiwan's contradictory narratives on Climate Change and it's Pacific ally Tuvalu - Institute for the Study of the Asia Pacific
15702
post-template-default,single,single-post,postid-15702,single-format-standard,bridge-core-2.2.6,ajax_fade,page_not_loaded,,qode-title-hidden,qode-theme-ver-21.3,qode-theme-bridge,qode_header_in_grid,wpb-js-composer js-comp-ver-6.2.0,vc_responsive 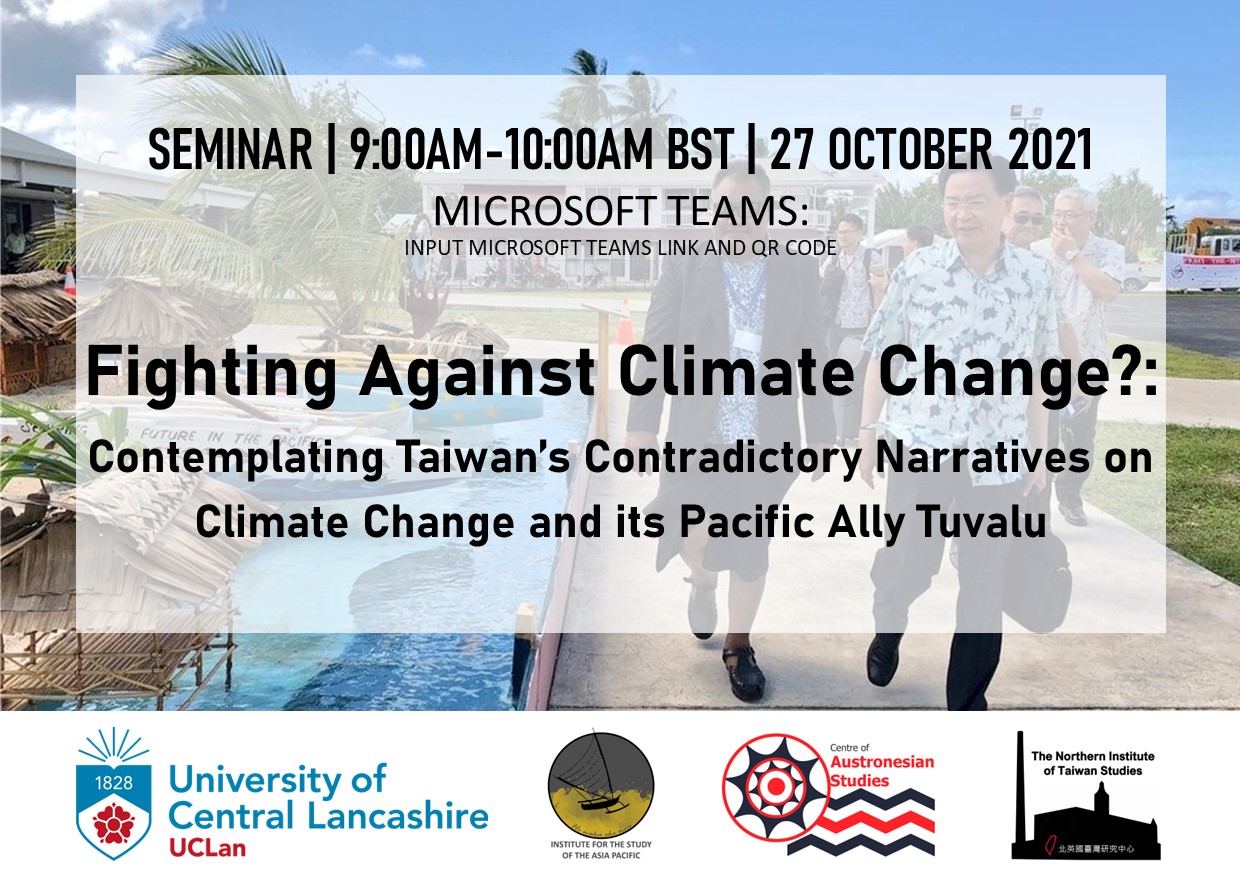 Join us on the 27th October for a Guest Seminar with Dr Jess Marinaccio and Mr Niuone Eliuta.

As noted in previous research, one potential way Taiwan can develop international soft power is portraying or narrating itself as supportive of global efforts toward environmental protection and mitigating the effects of climate change. Yet, close analysis of recent popular discourse in Taiwan reveals that discussion of Taiwan’s Pacific ally Tuvalu—one of the most vulnerable nations to the effects of climate change in the world—ridicules rather than empathizes with Tuvalu’s environmental struggles. In this lecture, we first outline how the Taiwan government has demonstrated its commitment to environmental protection both in official discourse and through numerous aid projects initiated in Tuvalu and other Pacific Island allies.

However, we next show how recent media reporting and literature from Taiwan has undermined government efforts. This popular discourse often makes light of Tuvalu’s climate-change plight, playfully suggesting that, if Tuvalu disappears because of climate change, Taiwan and Tuvalu can merge into a single nation and Taiwan can finally gain full independence from China. We contemplate these contradictory discourses from a unique Tuvaluan perspective.

We discuss how Tuvaluan people positively understand Taiwan’s aid projects in Tuvalu and their surprise on learning that climate change and Tuvalu have become something of a joke at the popular level in Taiwan. Finally, we caution that, because at least one of the Taiwanese literary works on Tuvalu and climate change that we discuss is being translated into English, official efforts to narrate Taiwan as an environmentally empathetic country may soon be strongly challenged.

Register on Eventbrite to book your place. 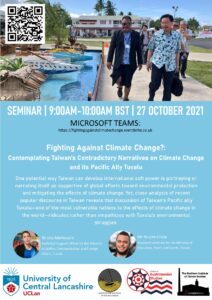